Although Protein A remains a top technology for monoclonal antibody purification, the industry continues to look for new approaches to improve conventional capture chromatography.

Capture of target proteins from raw harvest defines the remaining downstream processing steps. The more efficient and selective the capture, the less involved will be subsequent chromatography, filtration, formulation, and finishing operations.

For monoclonal antibodies, capture invariably means affinity chromatography with Protein A resins. Yet emerging molecular classes-and the desire to reduce monoclonal antibody (mAb) capture to its essential, most economic components-drive the search for alternatives.

“CaptureSelect products are proving to be generally useful for antibody fragments, bispecific antibodies, fusion proteins, and many other non-antibody therapeutic proteins. They can also be used to purify antibody molecules which, for structural or stereochemical reasons, Protein A cannot access. In addition, in some instances the target protein may not withstand low-pH elution conditions that are typically required for Protein A chromatography,” says Kevin Tolley, senior field application scientist for purification at Thermo Fisher Scientific.

Protein A binds at the interface of the CH2 and CH3 Fc region. One Thermo Fisher resin, CaptureSelect FcXL, binds lower down on the CH3 part of the Fc region and releases product under mild elution conditions, making it suitable for Fc-fusion molecules. Additional products are selective to the CH1 domains and the antibody light chain, offering a platform solution for Fab fragments.

The economics of biosimilar antibodies underscore the need for downstream process efficiencies and Xuemei He, R&D manager for chromatography media chemistry at Bio-Rad (Hercules, CA), relates that biosimilar sponsors “are looking for less-costly alternatives to Protein A capture.”

An attractive option is cation-exchange chromatography, a recognized cost-effective capture modality that delivers higher binding capacity, faster run times, and greater stability under clean-in-place conditions. The knocks on Protein A are cost and leaching of the potentially immunogenic ligand during column regeneration. In discussing the relative costs of Protein A and cation-exchange media over the years, however, the specific cost advantages of the latter have been difficult to pin down.

Binding and elution onto ion-exchange media is sensitive to feedstock conductivity. “Low conductivity is required for binding and that is sometimes an issue,” He admits. “If your product feed is 10,000 L, adjusting the conductivity could be time-consuming.” Where Protein A bind/elute has been standardized to near-platform status, cation exchange still requires tweaking to establish selectivity for binding the product and washing out impurities. “It takes more effort, but it’s doable,” he says.

The suitability of cation exchange for mAb purification arises from the proteins’ generally high isoelectric points, which renders them positively charged near pH 7 and allows species that are negatively charged at relevant acidity-for example-DNA, to pass through. This creates a near-perfect purification storm for antibody feedstocks.

Make no mistake: Protein A has higher, better-characterized affinity for antibodies than cationic exchangers. Host-cell proteins (HCPs) would present a purification challenge if they were present at significant levels in typical feedstocks. Since production cells secrete mAbs but, generally not HCPs, this is not the case. “SDS-PAGE [sodium dodecyl sulfate polyacrylamide gel electrophoresis] analysis finds aggregates and antibody fragments in the purified fraction, but negligible levels of HCPs,” He says.

Puridify (Herts, UK), founded in 2013, addresses protein capture from the angle of resin utilization rather than reinventing the proverbial wheel. “Our technology involves understanding the limitations of capture technology based on porous beads,” says Oliver Hardick, CEO.

Protein A has flourished up to now because, expensive as it is, its contribution to cost of goods was never much of a concern. Given that process in large part defines product, the industry has stuck with what it knows will work rather than assuming potentially risky technologies. The proliferation of antibody-derived therapeutics and biosimilars, however, provides the stimulus to rethink the initial capture step.

Puridify immobilizes Protein A on nanofibers rather than porous beads. Although the theoretical binding capacity is significantly lower than for beads, reliance on diffusion into pores is reduced and bind/elute occurs much more rapidly, so much more so that, according to Hardick, downstream productivity improves a hundredfold.

In addition to matching the approximate improvement in protein titers that Chinese hamster ovary cultures achieved during the past 15 years-and avoiding capacity mismatch-super-fast capture opens up a realm of novel possibilities in the utilization of what is arguably the costliest unit operation in mAb manufacture.

“Large columns take many hours over several shifts to run,” Hardick noted. “With super-efficient resins you can run a similarly-sized column in a tiny fraction of that time, or recycle a much smaller column repeatedly for the same elapsed time, with favorable economics. This provides bioprocessors with unprecedented flexibility in terms of process time and column size.” It also enables true single-use or single campaign use of Protein A columns for industrial manufacture.

Puridify is developing its novel Protein A resin, FibroSelect, through key industry collaborations. Together with GlaxoSmithKline, Hardick’s team recently won an award for a single-use capture evaluation project based on the new resin.

The industry has seen how utilization can improve Protein A economics, as it enhances productivity gains for other downstream operations. Emerging from the background noise is the contribution from improvement in conventional capture chromatography. “The doubling of Protein A resin binding capacity over the past five or six years is an example where downstream has evolved to match the needs of upstream,” notes Jonathan Royce, senior product manager at GE Healthcare’s Life Sciences business.

Nicolas-Julian Hilbold, bioprocess R&D engineer at Novasep (Lyon, France), sums up the current thinking within biomanufacturing: “Protein A capture chromatography is difficult to avoid due to its unparalleled selectivity, ease, and efficiency of implementation at industrial scale.” Although chromatography is generally viewed as a complex unit operation, Protein A purification simplifies the process while providing flexibility. “When deadlines are tight and time-to-market is critical, people know that Protein A will always provide the expected result,” he says.

While biomanufacturers have shown interest in such alternative non-chromatographic methods such as aqueous extraction or precipitation, these unit operations do not integrate as easily into platform processes as chromatography. The logical extension to this thinking leads to considering non-Protein A resins. Alternatives within the existing arsenal of chromatography media have a tall order to fill. But because they fail to provide equivalent selectivity, the process becomes “un-intensified.” Says Hibold, “these [non-Protein A resins] would probably require an additional chromatography step-four instead of the typical three-to achieve quality specifications.” Even if such resins were significantly cheaper, extending processing time would likely affect plant productivity and product quality negatively, while requiring additional development time as well.

Hibold does not believe Protein A will be replaced, particularly for standard mAb processes. Bioprocessors should instead look for efficiencies in process scheduling, the number and type of polishing steps, and optimization of buffer systems. Another alternative, continuous processing, has the potential to mitigate the costs of Protein A while reducing process footprints and infrastructure costs.

About the Author
Angelo DePalma, PhD, is a contributing writer to BioPharm International. 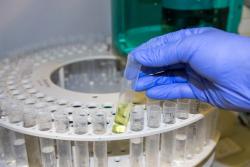