Various methods for transfecting molecules such as DNA, RNA, proteins, or drugs with high efficiency and low toxicity have been implemented and optimized for many different cell types. These include widely used techniques such as chemical transfection (lipid-based techniques), the use of viral vectors and electroporation.

Various methods for transfecting molecules such as DNA, RNA, proteins, or drugs with high efficiency and low toxicity have been implemented and optimized for many different cell types. These include widely used techniques such as chemical transfection (lipid-based techniques), the use of viral vectors and electroporation. To date, laser-assisted transfection of cells has relied on cumbersome Argon ion lasers1,2 or large, high-power lasers capable of achieving femtosecond pulses (titanium sapphire),3,4 with a few exceptions.5-8 The work reported in this article, and also recently published in Optics Express, 9 shows how the successful transfection and creation of stable cell lines is achieved using a compact, relatively inexpensive, violet diode laser (Toptica or Nichia, at 405 nm wavelength). Turovets et al.5 use an argon fluoride excimer laser at 193 nm to transfect plant cells. Shirahata et al.6 transfect mammalian cells using a 355nm pulsed neodymium-yttrium-aluminum garnet (Nd:YAG) with pulse duration of 10ns, and Mohanty et al.7 also use a pulsed Nd:YAG laser of wavelength 1064 nm and pulse duration of 17 ns. Sagi et al. also transfect mammalian cells using a Holmium:YAG laser (2.1 mm wavelength).8 These wavelengths were all used to create pores in the plasma membrane or to change the permeability of the plasma membrane through a variety of effects such as heating, absorption, photochemical effects, or the creation of reactive oxygen species.

Violet diode lasers are relatively recently commercialized optical sources. They are primarily utilized for data storage but are increasingly used in a number of roles in biophotonics, for example in confocal imaging,10 optical trapping in combination with imaging11 and, as we report here, in targeted photoporation and transfection of cells.

An exciting aspect is that the system is wholly compatible with confocal microscopy and optical tweezers, offering new directions for automated all-optical cell selection, poration, and imaging in a single system. This is a key development in biophotonics, and we predict that the work will be of widespread interest to researchers using violet diodes or investigating targeted transfection, or more efficient and less toxic means of cell transfection, especially in the case of slow-growing or non-dividing cell lines.

The output from either the Nichia plain (405 nm wavelength, 25 mW output power) or Toptica Photonics (CVLS-LH050-2V1, 405nm, 40mW) diode laser was directed into a home-built inverted microscope. The beam was passed through a neutral density (ND) filter and then expanded to fill the back aperture of a x100 magnification, oil-immersion microscope objective. A charge-coupled device (CCD) camera, coupled below the microscope objective, allowed observation of the strongly focused laser beam and the sample dish, which contained the cells to be transfected. The complete photoporation system is outlined in Figure 1. and its overall dimensions were 65 ×20 × 60 cm.

A beam-shutter from a single-lens reflex camera was used to provide the short exposure times required for photoporation. Cells were positioned by translating the sample stage in x, y, and z, such that the beam focus was at exactly the same position as the cell membrane.

CHO-K1 cells were routinely cultured in Eagle's minimal essential medium, supplemented with 10% fetal calf serum (MEM FCS). These cells were then seeded in a 30 mm diameter petri dish (with a glass bottom, approximately 0.1 mm thick), at a concentration of approximately 105 cells per dish. Cells were used for photoporation experiments when they were sub-confluent. The plasmid used was the pEGFP-N3 mammalian expression vector that contains a neomycin/G418 resistance gene and an enhanced green fluorescent protein (EGFP) gene. A second plasmid, pDsRed-Mito, also containing the neomycin resistance gene and a gene encoding a red fluorescent protein targeted to the mitochondria, also was used. Successfully transfected individual cells will survive because Neomycin/G418 resistance has been conferred, and they will continue to grow in the presence of the drug.12

Exposure time and beam power were determined empirically. A x100 microscope objective was used to focus the beam to spot size of 1-µm diameter. Cells which were exposed to a power of 3 mW for 3 sec led to immediate blebbing, auto-fluorescence, and irreparable damage. Exposure for 1 min to a power of 0.3 mW showed similar damage. Consequently, an optical power of 0.3 mW with an exposure time of 40 ms, using a single lens reflex (SLR) camera shutter (with a rise fall time of approximately one ms), were the chosen parameters for photoporation. The strongly focused beam from the violet diode laser yielded a power density of 1200 MW/m2, sufficient to optically porate the plasma membrane of CHO cells without causing any visible damage to the cell.

Twenty cells per plate were irradiated in the presence of 3 µg/mL medium (or medium only for the no-plasmid control). Figure 2 shows four of 20 CHO-K1 cells in one dish, exposed to the 405 nm laser diode beam at a power of 0.3 mW for 40 ms. After irradiation, cells were incubated at 37°C and 5% CO2 for 48 hr. The medium containing the plasmid was then removed and replaced with 2 mL MEM FCS containing 0.5mg/mL antibiotic (Geneticin/G418). Cells were then left for 10 days at 37°C and 5% CO2 with two further changes of media and fresh antibiotic until colonies formed. A further control with plasmid present, but no laser treatment, was included.

Figure 2. An Example of Photoporation on Four CHO Cells in One Sample - using a 405 nm violet diode laser at a power of 0.3 mW focused to a spot of 1 mm diameter. A x100 microscope objective is used to both image the cells and focus the laser beam.

Fluorescence was detected in both fixed and live cells using a Zeiss Axioscope. EGFP expression was detected using the fluorescein isothiocyanate (FITC) channel, and DsRed-Mito was viewed using the Rhodamine channel. Images were captured using a xillix ImageAnalyser system and camera and Cytovision software.

G418 resistant colonies were detected in the irradiated dishes containing pEGFP-N3 (or pDsRed-Mito) 12 days after irradiation with the violet diode laser, 10 days after the antibiotic was introduced, and after cells had undergone several divisions. No live cells were detected in either the non-irradiated controls or in the plasmid-free irradiated controls, confirming that antibiotic resistance had been transferred only to cells irradiated in the presence of the plasmid. Colonies were picked 12 days after laser irradiation, sub-cultured in a fresh dish in the presence of G418, and fixed after 6 days by washing twice with PBS (phosphate-buffered saline) before immersing in ice-cold acetone for 4 min. Cells were subsequently washed in PBS before being mounted in Vectashield and viewed under fluorescence, using the FITC filter for cells transfected with pEGFP-N3 or the Rhodamine filter for cells transfected with pDsRed-Mito. Fluorescent cells, transfected using this technique, can be seen in Figure 3. Cells continued to grow in the presence of G418. Fluorescence was detected two weeks after irradiation and also after eight weeks, indicating that the cells had been stably transfected with pEGFP-N3 or pDsRed-Mito. The efficiency of the technique and the viability of photoporated cells must be tested further. Varying the optical power and density of the focused laser beam and changing exposure time are likely to dramatically affect transfection efficiencies and toxicity. However at this early stage, using the parameters described earlier, many colonies grew, indicating high rates of transfection efficiency and cell viability.

Figure 3. a) Transfected, Live CHO Cells Expressing DsRed-Mito - viewed under x100 magnification, using the Rhodamine channel of a Zeiss Axioscope.b) CHO Cells Expressing EGFP - viewed under x63 magnification, using the FITC channel of a Zeiss Axioscope. Transfection was achieved, in both cases, by photoporation with a violet diode laser.

We have created CHO cell lines stably transfected with plasmid expression vectors pEGFP-N3 or pDsRed-Mito by photoporation of the cell plasma membrane, using a violet diode laser and simple optics. The laser source is compact, affordable, and able to porate the plasma membrane of CHO cells using sub-milliwatt power and an exposure time of tens of milliseconds.

Femtosecond lasers operating in the near-infrared have previously been used for laser assisted transfection work as they are thought to minimize cellular damage. However we observed no visible damage to individual cells exposed to the 405 nm laser beam. The formation of colonies from the single, transfected cells demonstrates that cell integrity is maintained. Femtosecond lasers operate via a two-photon effect; therefore the high powers reported in the literature (approx. 104 TW/m2 ) are due to the highly localized nature of two-photon excitation. In contrast, the use of a 405 nm, violet diode laser is a one-photon effect, requiring lower power (approx. 1,200 MW/m2 ) and, importantly, less precise focusing of the laser spot on the cell membrane. The exact mechanism of membrane opening due to interaction with the 405nm beam is not known but assumed to be a localized heating event.

Photoporation offers the advantage of targeted transfection, which is not possible with chemical, viral, or electroporation methods, which treat all cells in the sample population. The poration of individual cells or groups of cells can be visualized under a microscope, using the same objective for imaging and laser delivery. As a result, cells of interest in a mixed population can be identified and targeted for treatment, but without the need for micromanipulators or microinjection. In addition to this, holographic technology may be used to multiplex a single beam to create arrays of focused spots to porate many cells at the same time. In a fully automated system a spatial light modulator (SLM)13 would dynamically reconfigure the laser beam into an array pattern which matched the position of cells in a sample to be porated, and expose selected cells to the porating beam.

This method of violet laser-assisted photoporation also offers the possibility of directly porating not only the cell plasma membrane but the nuclear membrane too. This would be beneficial to researchers wishing to transfect slow-growing, non-dividing cells, or primary cell lines such as neurons and hepatocytes. The miniature size of the light source and simple optics involved mean that instrumentation of this device will be readily achievable. A further possibility is to incorporate the laser into other optical systems such as a confocal microscope or optical tweezers, or to combine it with other activities such as Raman spectroscopy, microfluidics 14 cell sorting,14,15 fiber trapping, and spatial light modulation.13

The authors wish to acknowledge the support of the UK Engineering and Physical Sciences Research Council and the Scottish Higher Education Funding Council for funding through a Strategic Research Development Grant award. 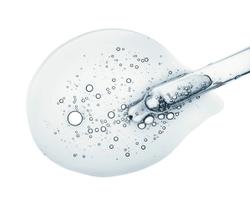