Inside Washington: FDA Revises Policies for Biologics and Drugs

For the past year, FDA officials have been developing new policies and programs to update and revise methods for manufacturing drugs and biologics. Last month, commissioner Mark McClellan unveiled several key proposals that further implement FDA’s two-year "Pharmaceutical CGMPs for the 21st Century" initiative that was launched last August. The initiative’s aim is to spur industry adoption of innovative manufacturing technologies and to relate agency oversight of pharmaceutical quality to product and process risks.

FDA issued a number of guidance documents last February addressing good manufacturing practices (GMPs) and setting the stage for the recent announcements. The new policies aim to clarify policies for implementing Part 11 electronic records and electronic signatures, managing post-approval changes, and ensuring the quality of sterile drugs produced by aseptic processing. Another draft guidance encourages manufacturers to adopt innovative drug production technologies, and a similar proposal for biotech manufacturing is in the works.

FDA also is making changes in its plant inspection program. It is establishing a special cadre of highly trained field staff to inspect pharmaceutical facilities; revising its pre-approval inspection program to focus on more high-risk products and processes; and establishing a program for discussing and resolving scientific and technical disputes related to GMP issues.

FDA has been struggling for years to set standards and rules for how manufacturers should ensure the integrity of electronic records and signatures that replace FDA-required paper documents. The agency adopted final regulations implementing 21 CFR Part 11 in March 1997 only to face continual complaints from industry. Manufacturers claimed that the rules were too costly to implement and discouraged the use of electronic technology and innovative manufacturing methods. Issues came to a head recently as FDA inspectors began citing firms for noncompliance with Part 11 during GMP inspections. To avoid such problems, companies said they would go back to paper-based record systems.

In response, FDA withdrew several earlier guidances on specific Part 11 components in February and announced its intent to adopt a more relaxed enforcement posture for this complex policy. Now FDA is starting over with Part 11 by launching a formal rulemaking process to revise the policy — an initiative that will take several years to accomplish. The main task is to revise the preamble to the rule, clarifying its scope and intent, explains Janet Woodcock, director of the Center for Drug Evaluation and Research (CDER).

While the Part 11 rewrite proceeds, the agency issued a final guidance for manufacturers to follow in the meantime. The guidance clarifies points raised in the hundreds of comments filed by regulated parties, and it reiterates FDA's intention to not enforce requirements for validating computerized systems, maintaining computer-generated, time-stamped audit trails, and ensuring future access to records and copies of them. FDA also will use discretion in calling for legacy systems (those operational before Aug. 20, 1997) to meet Part 11 requirements. Manufacturers must continue to maintain and submit electronic information that meets requirements set by FDA predicate rules calling for controls on electronic record systems, written policies, and system checks to ensure record and data integrity. Additional guidance may be issued on specific issues.

Another FDA priority is to encourage industry to develop and file more comparability protocols (CPs) to manage manufacturing changes and simplify the agency's post-approval regulatory process. This approach could reduce the considerable resources FDA devotes to reviewing thousands of manufacturing supplements. It also may make it unnecessary for manufacturers to obtain prior FDA approval before making more routine changes in equipment, procedures, and ingredients.

In February, FDA issued a draft guidance on developing CPs for small-molecule drugs for humans and animals, including well-characterized synthetic peptides. That guidance describes the chemistry, manufacturing, and controls (CMC) information needed to create a protocol able to reduce the reporting category level for a post-approval manufacturing change.

Last month FDA continued this initiative by issuing a similar draft guidance on developing CPs for large molecules, including more complex peptides. The new guidance describes situations where a CP might be useful (such as changes in equipment size, raw materials, and production steps); when it would be inappropriate (for example, changes requiring new clinical data, product formulation, or delivery system type); how it should be submitted to FDA; and what data should be included. The guidance notes that a move to a new facility may be difficult to address in a CP because it could involve changes difficult to identify in advance.

FDA will evaluate comments on this proposal and the earlier draft guidance with an eye to issuing final versions in 2004. The agency also plans to evaluate the number and types of manufacturing supplements submitted each year to identify further opportunities for coordinating review and inspection activities and managing manufacturing changes without prior FDA review or approval.

Somewhat unexpectedly, FDA issued another long-awaited guidance that clarifies policies for manufacturing aseptically processed sterile drugs and biologics. Ensuring the quality and purity of these products is a top priority for FDA because their "high therapeutic significance" makes a steady supply of these products especially important. However, the need to meet very high quality standards has led to manufacturing and compliance problems, often creating critical drug shortages.

By clarifying FDA regulatory expectations, the new guidance seeks to reduce such difficulties. It replaces a 1987 guideline that generated years of debate over how best to ensure purity and quality of sterile therapies where terminal sterilization is unsuitable. Last September, FDA issued a concept paper on the topic, which was discussed later at an advisory committee meeting and then closely reviewed by an agency-industry working group formed by the Pharmaceutical Quality Research Initiative. The group compiled information on current industry aseptic processing practices and developed recommendations for the concept paper.

FDA plans to explore sterile manufacturing and other risk-based approaches to overseeing GMPs at several scientific workshops in the U.S. and overseas. This effort aims to promote cooperation and collaboration in harmonizing international scientific standards on drug quality and to encourage technological innovation around the world, an issue that the ICH plans to address at the November ICH6 conference in Japan.

FDA also is establishing more collaborative arrangements with industry and academia to gain scientific and technical information valuable for developing science-based regulatory policies. And it is working to develop a quality systems approach for its own review and compliance operations.

Since FDA has issued many of its planned guidances on GMP issues, Woodcock expects that additional technical issues will warrant further clarification through guidance documents. She and her colleagues will evaluate GMP regulations, compare drug and medical device rules, and examine differences in GMP requirements of European and other international groups to identify harmonization opportunities. One important decision will be whether FDA needs to make broader revisions in its GMP regulations or continue to pursue its goals through the guidance-writing process. BPI 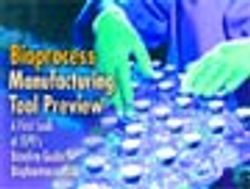