Biopharmaceuticals are perceived as being at risk of transmitting spongiform encephalopathies to patients, although there has never been such an incident. Clearance studies such as the one described in this article (using a TSE model) can validate inactivation and enhance confidence in the safety of therapeutics produced using animal-derived cell culture supplements.

Sponsors of therapeutic biologicals must demonstrate they are not introducing disease-causing agents into patients. There is a perceived risk - among the public and some regulators - of spongiform encephalopathy transmission in biotechnological products using bovine-derived cell culture components. Although there have been no incidents of transmission to humans of spongiform encephalopathies, particularly bovine spongiform encephalopathy (BSE), precautions must be taken. By employing animal-sourced materials from younger animals, which have never shown effects of the disease; using a robust process to produce cell culture supplements; and purifying the therapeutic products, the perceived risk is reduced.

However, when compared with other adventitious agents, prions - which cause transmissible spongiform encephalopathies (TSEs) - are a greater concern because they are so difficult to inactivate, and there is currently no rapid, reliable technique to detect their presence. In this article, we present information about prion diseases, critical elements of TSE agent clearance studies, and a case study for inactivation of TSE by use of alkaline conditions during the manufacturing process of a cell culture media supplement.

TSEs are neurological diseases caused by a proteinaceous agent called a prion. These diseases include Creutzfeldt–Jakob disease (CJD) in humans and scrapie in sheep. The disease-causing protein is thought to be the result of alternate folding of a protein containing the same amino acid sequence found in the circulation of uninfected individuals. How the normal protein is converted to the infective form is the subject of much speculation and experimentation. One particular TSE - BSE, or "mad cow disease" - is of particular concern for producers of biological products.

Previously, TSEs were thought to be species-specific. That is, the disease in one organism could not be transmitted to another. However, events in the United Kingdom and Europe have indicated that a disease called variant CJD (vCJD) is quite likely derived from BSE (1). The route of transmission is thought to be the ingestion of neural tissue from a diseased animal. The BSE agent has now been shown to be transmissible to sheep by direct intravenous injection (2).

These findings indicate that concern about the use of bovine materials in the production of biopharmaceuticals is valid. However, according to European, World Health Organization (WHO), and U.S. Department of Agriculture (USDA) regulations, serum and plasma derived from veterinary-screened animals in non-BSE countries are considered low-risk materials (3–5). A risk assessment for vaccines produced using bovine-derived material is provided by FDA on its website (6).

Unfortunately, BSE is appearing in areas of the world once thought to be free of this prion agent, and we clearly do not know where it will be found in the future. The CPMP Note for Guidance states: "Manufacturers should continue their investigations into removal and inactivation methods to identify steps/processes, which would have benefit in assuring the removal or inactivation of TSE agents" (5).

Hamster strain 263K. With relatively short incubation periods of less than 12 months and the highest titer of any of the TSE rodent adapted strains, the hamster 263K strain is often chosen as a model for TSEs in validation studies. This strain is well characterized and the incubation period and brain histopathology are well documented (Figure 1). A recent study supports the validity of hamster scrapie as a model for other TSE agents (8). The method of preparing the spiking material is an important consideration in the design of a clearance study. The use of a crude brain homogenate, as the spiking material in an inactivation step, provides the greatest challenge, whereas a less viscous preparation has been found superior for some removal steps (9).

The resistance of the hamster-adapted 263K strain to inactivation is similar to that of other TSE agents, and methods that have been shown to successfully inactivate prions have been reported (10). Sodium hydroxide has been reported to be an effective inactivating agent for TSEs, and it is widely used in biotechnology to sanitize processing equipment (5,11).

We used EX-CYTE growth enhancement media supplement (Serologicals Corporation) as our case study for inactivating a prion agent. This medium is a water-soluble mixture of lipoproteins derived directly from bovine serum or plasma. It is used as a supplement to reduce the use of fetal bovine serum in cell culture media and as a component in serum-free cell culture media to promote the growth of mammalian cells and the production of genetically engineered proteins. Our case study involves the validation of the alkaline inactivation step for EX-CYTE.

Alkaline treatment (NaOH, pH 12.161, 20Â°C±1Â°C) is one of the steps in the production of the growth medium. Figure 2 shows its production scheme, including the high-pH treatment step (patent applied for) (12), which was validated to demonstrate the reduction of prions.

Experimental design. The in vivo evaluation of the alkaline inactivation step included

Preparation of spiking material and controls. The spiking material used in the study was prepared in hamsters infected with the hamster-adapted (263K) strain of the scrapie agent. A supernatant of a 10% crude hamster brain homogenate was used to spike the process starting material. The positive control was the hamster-adapted 263K strain of scrapie agent licensed from The Institute of Animal Health (IAH). The sham control was Hanks' balanced salt solution (HBSS). Twelve uninoculated control animals and 12 sham-inoculated control animals - from the same shipment of animals, with the same husbandry conditions and maintenance, kept in the same location as the inoculated animals - were included in the study. Hamsters were observed for clinical disease signs and sacrificed when moribund.

Performance of the inactivation step with spike. Two duplicate runs of the alkaline treatment were performed. The initial pH of the load material was 10.48. The spiking material was added to the load material at a ratio of 1:10. The pH of the material was increased to 12.1 by the addition of 1N NaOH. Samples were collected for the infectivity assay at the zero time point and every two hours for an eight-hour period. Each time point sample was immediately neutralized to a pH of 7.5 to 8.0.

The in vivo assay requires that clinical observations be made and that the histopathology of infected animals be reported.

All animals were randomized and individually identified with radio frequency identification (RFID) microchips from American Veterinary Identification Devices (AVID). Six hamsters were injected per dilution. Each hamster was injected intracerebrally with 0.05 mL of appropriate test material. Animals were observed daily for clinical signs of scrapie. Clinical signs of the disease proceed from abnormality of gait, tremors, and aggressive behavior to severe ataxia. Animals at the terminal disease stage were sacrificed. The study animals were observed for up to 17 months.

Histopathology. At the appropriate time point, hamsters were sacrificed by CO2 asphyxiation. The brains were removed and fixed in 10% formalin. Three transverse blocks of tissue were cut using a stainless steel brain mold to standardize the sectioning. Brain sections were treated with formic acid before processing for microscopic examination.

The areas of the brain examined included the medulla, cerebellum, thalamus, hippocampus, and cerebral cortex. Hamsters identified as scrapie-infected had vacuolation of the brain, which is consistent with published criteria (13). Vacuolation of the neuropil (the brain tissue that lies between neurons) was subjectively graded minimal for those areas of the brain having a few, small, discreet vacuoles to marked, where vacuoles were confluent, numerous, and variable in size. Vacuoles noted as mild or moderate represent intermediate levels of severity.

Figure 2. Production scheme for EX-CYTE, including the high pH desorption step, which was validated to demonstrate the reduction in prions.

Biopharmaceutical companies use multiple strategies to reduce the risk of TSE contamination. The source of animals, the nature of the animal material, and the processing steps should always be reviewed and documented. Clearance studies using model TSE agents can enhance confidence in the safety of animal-derived products. Alkaline treatment for a duration of six to eight hours, which is only one of the purification steps used in the production of EX-CYTE, has been shown to cause a 3.7 log

reduction in prion load and to constitute an effective inactivation method.

(3) WHO, Report of a Who Consultation on Medicinal and Other Products in Relation to Human and Animal Transmissible Spongiform Encephalopathies; with the Participation of the Office International des Epizooties (OIE), WHO/EMC/ZOO/97/3/EN (World Health Organization, Geneva, Switzerland, 24-26 March 1997).

(8) Stenland, C.J. et al., "Partitioning of Human and Sheep Forms of the Pathogenic Prion Protein During the Purification of Therapeutic Proteins from Human Plasma," Transfusion 42(11), 1497-1500 (November 2002). 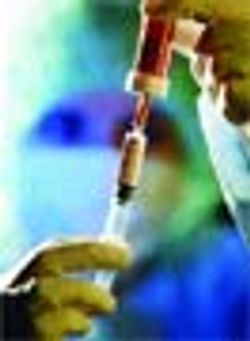