Researchers from Johns Hopkins have stated that they were able to extend the lives of mice with aggressive brain tumors by delivering biological treatments directly to the brains of the mice using stem cells derived from human body fat. The researchers suggest that surgically removed glioblastomas (brain cancer cells) could be used in humans to find and destroy remaining cancer cells in difficult-to-reach areas of the brain.

The researchers used mesenchymal stem cells (MSCs) harvested from human fat tissue in the mouse experiments. MSCs were modified to secrete bone morphogenetic protein 4 (BMP4), a small protein involved in regulating embryonic development and known to have some tumor suppression function. The researchers injected stem cells armed with BMP4 into the brains of mice that had already been given glioblastoma cells several weeks earlier. In a report published in Clinical Cancer Research, the investigators say the mice treated with BMP4 had less tumor growth and spread, and their cancers were less aggressive and had fewer migratory cancer cells compared to mice that didn’t get the treatment. In addition, the mice that received stem cells with BMP4 survived significantly longer, living an average of 76 days, as compared to 52 days in the untreated mice. These findings build on research published in the March 2013 issue of PLOS ONE, which showed that harvesting MSCs from fat was much less invasive and less expensive than harvesting from bone marrow. 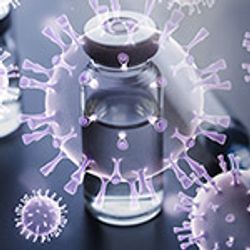