CDMOs must consider challenges associated with the complexity of contract pharmaceutical manufacturing when approaching digitalization projects.

A significant benefit of digitalization in the pharmaceutical industry is making documentation processes both safer and more efficient. Although CDMOs by their very nature differ from their pharmaceutical and biotech customers, these differences can be more noticeable when it comes to digitalization. Laboratory testing equipment is one such example because customers, not the CDMO, determine what testing equipment is to be used for a particular analysis. A drug producer can use one type of equipment, but for a CDMO it may be that many different types of equipment are needed for the same kind of testing depending on the customers’ choice. The resulting variety of details in the test methods make the digital connection and the design of digital processes more challenging. Furthermore, aCDMO usually has a heterogeneous customer base with diverse products, which leads to a multitude of process variants, such as varying documentation processes. A one-to-one adoption of this variety of paper-based documentation processes in the digital system would lead to a high maintenance effort and thus loss of efficiency. Therefore, it is important to harmonize and standardize the processes in order to digitalize them using software.

Digitalization usually doesn’t take place in one single project; it is rather approached as a comprehensive program containing several sub-projects. When it comes to processes, these sub-projects often depend on each other and have some correlations. For this reason, it is important to determine if there are dependencies between the projects or even possible synergies. The digitalization of a process could well affect other projects. Additionally, determining business process ownership may not be as transparent as one might hope. As such, it is important to identify cross-divisional processes and define their ownership in order to sucessfully digitalize them.

While standardization can help a CDMO to reduce overall process complexity, it is crucial that flexibility be maintained to fulfill individual customers' needs. Paper-based processes can be flexible (e.g., when handling different filling processes based upon a customer’s requirements), but the use of a digital system might affect flexibility because it aims to standardize processes in order to handle them in the system. For example, a CDMO’s customers use different wordings in their production specifications. If not standardized, the different wordings result in multiple process variants that would need to be reflected in the digital system. In this case, the use of predefined text modules that cover all important aspects would meet both standardization and flexibility. Digitalization itself will not prevent a CDMO from remaining flexible, but the aspect of flexibility should be considered in the design of the systems.

The technical and process elements of digitalization are important aspects to be considered within the organization, but these are only one side of the coin. Today, technologies are part of our daily lives, and the transformation within an organization that comes with digitalization affects personnel. The organizational culture itself is a system of shared beliefs and attitudes that develop over time within an organization. Thus, when the process is not well explained to staff or the fear of using a new modern technology is not taken seriously, acceptance of the new system can be low. Different educational levels of staff, generation gaps, and even vision and corporate mission statements can all affect transformational management. Therefore, the key for many organizations is how to maintain a smoothly functioning culture and workplace when the workplace itself changes.

When it comes to accepting and using digitalization, staff can be divided into digital or non-digital natives. There may be other categories of stakeholders that should be considered as well, including management, affected employees, workers’ council, as well as both supporters and detractors of the project. A sophisticated stakeholder analysis is key to creating dedicated and effective transformation activities. It is advisable that organizations create a dedicated transformation team at an early stage, ideally incorporated into the corporate strategy.

Digitalization as a term has a broad spectrum and can take place within many different parts of a CDMO. While Industry 4.0 is production oriented, there are different digitalization projects that are not directly associated with the value chain, such as data analytics software in the field of R&D. It is important to segment the topic of digitalization into different groups to get a proper overview. For example, digitalization can be as simple as replacing a paper book at a visual inspection workstation with a tablet. Staff members would enter their inspection findings directly into the enterprise resource planning system using the tablet instead of documenting them in a paper book.

The process could also be more complex, such as digitally designing formerly paper-based processes within a new software. For example,the transfer of measured data in a laboratory previously taking place in an analog manner could be connected to a digital process. The measuring equipment would automatically send the data to the software, which stores it and processes the data for downstream steps. Digitalization also covers new trends and technologies such as machine learning, artifical intelligence, blockchain, and big data. And while there is significant potential in these technologies, it is best to use them only where they make the most sense. Projects should be chosen independently from their duration and complexity, focusing instead on whether the project will increase quality and efficiency and, thus, add value to the organization and all related partners, including customers and suppliers.

When it comes to digitalization, pharmaceutical companies and CDMOs have a lot in common. A clear focus on projects that add value as well as managing organizational and technological change are only two examples. However, the high complexity due to the high process variety as well as the digitalization of processes while maintaining flexibility are specific challenges of a CDMO. Having the expertise necessary to deal with these challenges is crucial for a CDMO. Done right, digitalization has a positive impact on the quality of products and processes of a CDMO, and a customer-centric and innovative approach maintains its flexibility.

Consider the following key points when approaching digitalization as a CDMO:

When referring to this article, please cite it as K. Vogt, “Digitalization: A CDMO’s Perspective,” in BioPharm International Outsourcing Resources eBook (February 2020). 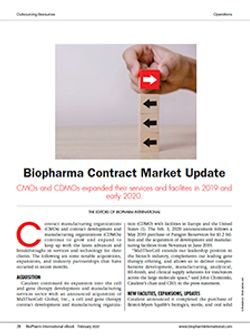